"By the pricking of my thumbs something wicked this way comes..." - William Shakespeare "Macbeth"

"I know of the leafy paths that the witches take
Who come with their crowns of pearl and their spindles of wool,
And their secret smile, out of the depths of the lake..." - William Butler Yeats "The Withering of the Boughs" 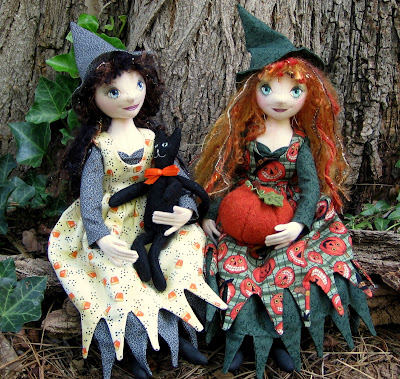 Well not too wicked. Meet Tabitha and Penelope. Two witches who personify the "trick" and "treat" of Halloween. Tabitha is all about the tricks. She can be a terrible nuisance; soaping cars, putting tangle spells on hair, spilling milk, and hiding keys or shoes...but there is one way to avoid her pranks. Because of her great love of pumpkins, she'll never play tricks on a home with a jack-o-lantern outside! On the other hand, Penelope and her cat Poe are MUCH more interested in the treats and love to make all kinds of goodies for the neighborhood kiddies...the yummy kind because Penny is a Good witch! They live together despite their differences and figure between them they have all the Halloween bases covered.

In the spirit of these two I give you some bits of classic witchery that I love...

She is neither pink nor pale,
And she never will be all mine;
She learned her hands in a fairy-tale,
And her mouth on a valentine.
She has more hair than she needs;
In the sun 'tis a woe to me!
And her voice is a string of colored beads,
Or steps leading into the sea.
She loves me all that she can,
And her ways to my ways resign;
But she was not made for any man,
And she never will be all mine.

Round about the cauldron go;
In the poison'd entrails throw.--
Toad, that under cold stone,
Days and nights has thirty-one
Swelter'd venom sleeping got,
Boil thou first i' the charmed pot!

Fillet of a fenny snake,
In the cauldron boil and bake;
Eye of newt, and toe of frog,
Wool of bat, and tongue of dog,
Adder's fork, and blind-worm's sting,
Lizard's leg, and howlet's wing,--
For a charm of powerful trouble,
Like a hell-broth boil and bubble.

Scale of dragon, tooth of wolf,
Witch's mummy, maw and gulf
Of the ravin'd salt-sea shark,
Root of hemlock digg'd i' the dark,
Liver of blaspheming Jew,
Gall of goat, and slips of yew
Sliver'd in the moon's eclipse,
Nose of Turk, and Tartar's lips,
Finger of birth-strangl'd babe
Ditch-deliver'd by a drab,--
Make the gruel thick and slab:
Add thereto a tiger's chaudron,
For the ingredients of our cauldron.

Cool it with a baboon's blood,
Then the charm is firm and good.

Unbeliveable as it may seem I knew this second one one by heart at a ridiculously young age. I'm not sure what that says about my upbringing but it certainly was a literary one....

Posted by FairiesNest at Thursday, September 04, 2008
Email ThisBlogThis!Share to TwitterShare to FacebookShare to Pinterest