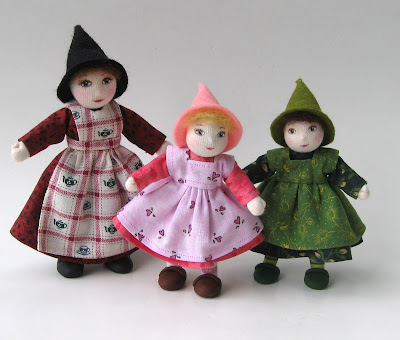 Here's a trio of witches I just finished for a commission, aren't they cute? A mommy kitchen witch and her daughters; a love witch and a green witch. Imagine all the trouble that combo might get into!

Because of the low response to the fabric exchange I've decided to hold off and try again in January. If at first you don't succeed...
And I have a big round birthday coming up in September so I think it just might be time for another gift away in celebration...something special this time! (How's that for a tease?!) Stayed tuned for more details.....

But while you're waiting you could head over to The Cart Before the Horse blog where Jo is giving away an awesome doll like this! Pretty wonderful, so go check it out! 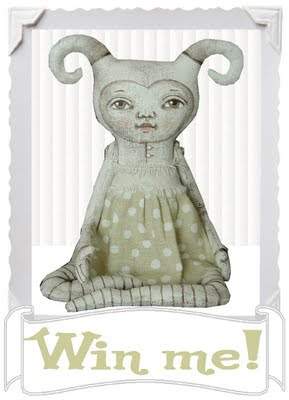 Posted by FairiesNest at Friday, August 28, 2009 14 comments:
Email ThisBlogThis!Share to TwitterShare to FacebookShare to Pinterest

When the bough breaks...

I have been terribly bad about posting on any kind of a regular schedule lately and that's something I'm going to work hard on changing now that school is starting up again. Actually I have a really good excuse for my absence this week...now I sound like one of my teens when they've come in after curfew, "I swear I have a good excuse this time!"... but we had a bit of a calamity here Wednesday night and things have been in... hmmm... let's just say a "state of disarray" ever since.
We had a small storm that night, nothing major, no heavy winds, no fierce bolts of lightening...but as it was winding down I heard a strange cracking noise that went on for several minutes followed by a dull THUD. Then the power went out. I looked out the front door to find that the massive, 100 + year old, Black Locust tree next to the house had decided that it was tired and that it was time to put down one of it's trunks. There was no horrible crash and amazingly nothing except a few power lines were damaged. Even my neighbor's bushes and flower garden came through unscathed! And usually his car would have been parked right where the trunk fell but he was gone at the time. It really seemed like the tree decided it was just time to put down the burden. Unfortunately there is a huge crack running down the middle of the rest of the tree so the whole thing will have to come down....it's heartbreaking to loose a giant tree like that. Who knows all the history that he's seen go past, it's like loosing an old friend as we've lived here for 25 years. 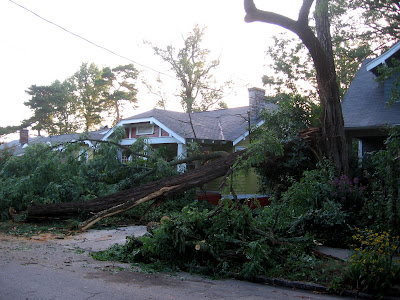 It's been kind of crazy ever since. First the parade of firemen, police, and power company people; then the next few days more power trucks and employees discussing whether the rest of the tree was in immediate danger of falling...they decided to take off some more limbs to prevent more destruction of power lines...then my hubby, son and neighbors wielding chainsaws to clear the debris, and tomorrow the tree guy will be back to take down the remaining tree. I know I'll shed a few tears in the process, I hate to see him go.

These pictures were taken Thursday morning after the firemen had removed all the limbs in the street and the power lines were back up. So you can see I Do have a pretty good excuse for my distraction! Hopefully we'll be getting back to normal soon. 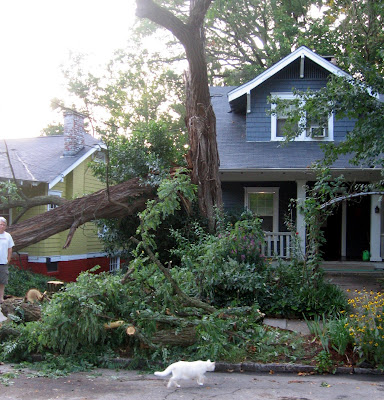 Posted by FairiesNest at Sunday, August 23, 2009 3 comments:
Email ThisBlogThis!Share to TwitterShare to FacebookShare to Pinterest 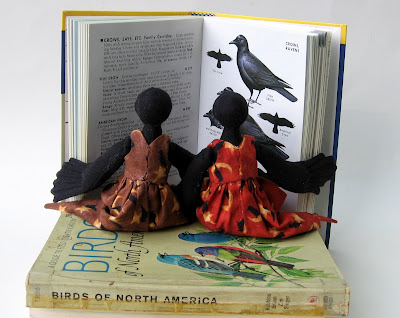 As you probably saw in the last post, I've had crows on my mind lately and these two are why. 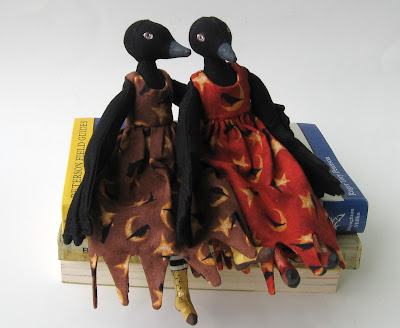 I just finished them yesterday and they are so tiny and cute, just 7" tall. I was thinking of the Counting Crows rhyme the entire time I made them and they seem to personify the number two...
One for sadness, two for mirth;
Three for marriage, four for birth;
Five for laughing, six for crying:
Seven for sickness, eight for dying;
Nine for silver, ten for gold
Eleven a secret that will never be told.

There are so many versions of this rhyme but this one is my favorite and seems to be the one on which Heidi Holder's marvelous book is based. 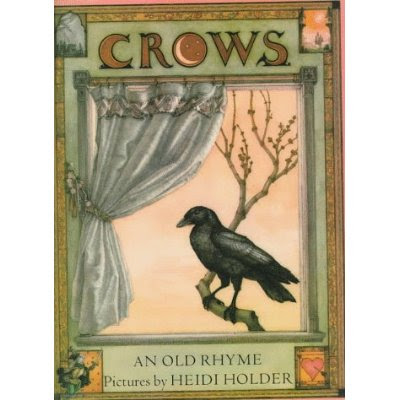 The illustrations in this book are breathtaking and it's certainly one to have if you love beautiful childrens' books. ..and you know I do! Crows and kids' books...a perfect combo for me! There's also a fascinating explanation of the Crow augury here that might be of interest to other Corvidae fans. 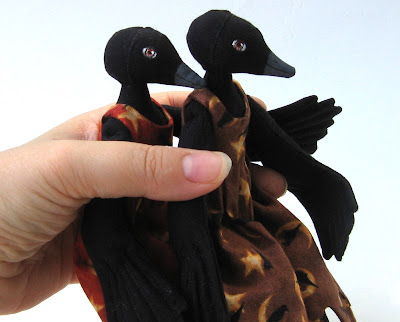 Now an update on the fabric swap. So far we have had only 9 people sign up and this just isn't enough. So I'm debating scrapping the whole thing or maybe giving it a try in January. What do you all think?
Posted by FairiesNest at Wednesday, August 05, 2009 13 comments:
Email ThisBlogThis!Share to TwitterShare to FacebookShare to Pinterest
Newer Posts Older Posts Home
Subscribe to: Posts (Atom)