Craft - A Digression from my Inner Word Geek

Okay I want you to do something for me... think about the word "craft". What's the first thing that pops into your head, and be honest. Now hold that thought because today we have a visit from my inner word geek and she's really worked up about the denigration of this word. Oh my, she's here already, "denigration"?! Usually I can keep her in the back of my head, though she's prone to popping out with comments like, "Don't use the word "wonderful" again, plu-eeze!", and the occasional non sequiter remarks like"I love the word exacerbate", or "why doesn't anyone say popinjay anymore?" but she's here and toting a dictionary today so watch out! 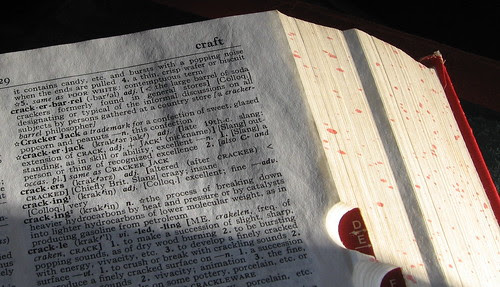 This all started with a conversation I had last weekend. A couple of my friends were discussing getting together for a craft night so we could bounce ideas off each other, maybe learn some new skills, and generally let our creative sides out to play and grow. I asked another friend if she might like to join us and she got a horrified look on her face and replied that she wasn't "crafty" and that was "something she would do with her kids." I was astonished! What would make a terrifically intelligent and highly creative person respond so negatively? "Crafty?!" Ouch!

So I started thinking about the word "Craft" and I just couldn't stop. According to Merriam Webster Craft means:
1 : skill in planning, making, or executing :dexterity
2 : an occupation or trade requiring manual dexterity or artistic skill
3 : skill in deceiving to gain an end
4: to make with skill artistry or precision SYN: see ART
5: plural usually craft a : a boat especially of small size (okay geek, this one's not really relevant...)

So the main word I'm seeing there is "skill". Skill is something that is learned, usually through hard work and lots of practice right? Some lucky folk are born with innate talent but they still have to acquire skill. Skilled artistry is the major component of most of what society considers "Art" and most artists will describe the process of acquiring that skill as "learning their craft". But here's the problem, despite the fact that they are synonyms, somewhere along the way craft and art became separated in our minds. Art became an acceptable and admired way to work but craft was relegated to a frivolous pursuit involving popsicle sticks and lots of glue; an unimportant activity best left to women with nothing better to do and small children. Somehow we went from William Morris and the Arts and Craft movement to an occupation for children, camp counselors, and Martha Stewart wannabes.

Now I can see how it happened. First off there's the tendency to discount any craft that is mainly practiced by women. Sewing, knitting, embroidery, crochet have always been seen as arts that women learn, making them "woman's work" and thus less important or artistic. Making the practice of these arts a "crafty" pursuit belittles the amount of time involved in really learning these skills. These crafts are seen as somehow less worthy than say painting or pottery...despite the fact that they require the same amount of skill to do well. So we venerate the great painters, writers, and musicians of history but the seamstresses remain unknown. 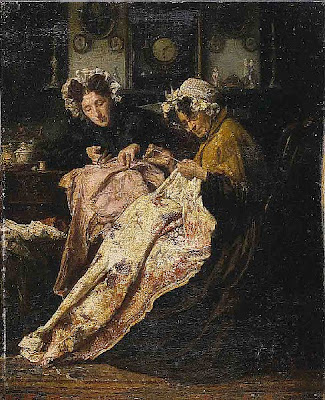 Secondly, for years now we've had all kinds of folks on television telling women that they can make this and that craft with just a little time and almost no effort if they'll just buy this book/paper/glue/pattern. It's become another form of mass consumerism. And as a veteran of many craft shows I can tell you that lots of people have bought into the notion that just about anything constitutes "crafts"...just wind some wire and beads around a wine glass or glue some silk flowers to a pin and you're in business. On one hand I think it's wonderful that more people are exploring their creativity and playing with all kinds of art mediums but if it doesn't require skill can we really call it craft?

So there we are... It just seemed important to me that I put up some kind of defense for the word and hopefully help it to recover some of the respect that it deserves. Let's embrace the word "Craft" and fight the derogatory baggage that it's acquired in the 21st century. Don't be afraid to craft...you just might learn an art!
So now what did you think of when I first mentioned craft? Did I change your mind any?


And just in case you're still with me, I did load some new dolls in the shop so go take a peek. And I promise to keep the word geek in check for awhile.
Posted by FairiesNest at Thursday, January 28, 2010
Email ThisBlogThis!Share to TwitterShare to FacebookShare to Pinterest