I have at last finished the first of my storybook dolls. Little Red Riding Hood, in her signature outerwear of course. I put a lot more detail into the face then I usually do on these small dolls and I'm so pleased with how she turned out! She's only 5" tall from the tip of her hood to the soles of her little mary janes. 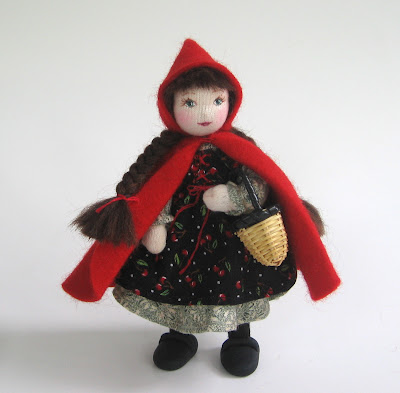 You can see more pictures here.
The Story of Little Red Riding Hood has undergone some amazing transformations over the years. In the older versions the heroine saves herself with her intelligence and quick thinking, but in the later versions, including Perrault's, she is completely witless and of course has to be rescued by a man. For a fascinating article on this process and some analysis of the story read Terri Windling's marvelous article over at the Endicott Studio.

While I was never that fond of the story as a kid, having access to only the latter version, I have always had a soft spot in my heart for Little Red Riding Hood dolls. When I was about 5, I had a handed down Ginny doll that had a red riding hood outfit, and this doll was one of my all time favorites. We called her Luleela, which I think came from my baby sister's pronunciation of the story, and I played that doll to death, losing all her clothes over the years and most of her hair as well. Today she is put away, waiting for the time when I can restore her to some of her faded glory.

More storybook folk will be arriving soon! Up next...Alice, of course!

Posted by FairiesNest at Monday, April 21, 2008
Email ThisBlogThis!Share to TwitterShare to FacebookShare to Pinterest