I've been working on a colony of rabbits; or a warren, down, trove, leash, trace...insert collective noun of choice...yea, I'm pretty much of a word geek. But I digress. Since it is March and I am a well known Alice fanatic, I thought I'd share a few of the hares I've created this week. 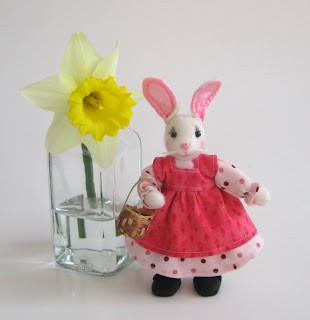 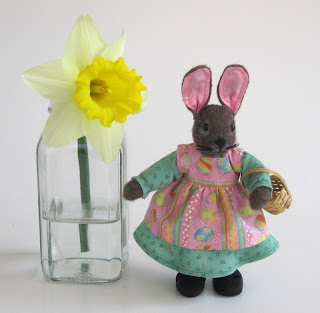 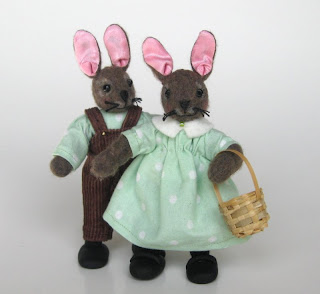 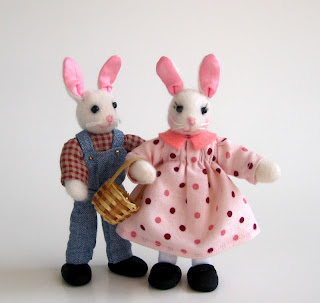 And for other lovers of all things "Alice", check out this 1903 Alice in Wonderland movie at Darkling Woods Studio blog. It's kinda rough, but pretty amazing if you consider the limitations of the time period.

This morning while thinking about writing this post I was trying to figure out just why I have always been so drawn to these books...and it's definitely plural, books, because I actually love "Alice Through the Looking Glass" even more than its predecessor. As a child, I was attracted to the story of a young girl entering a world of fantasy, but even then I'm sure I felt that this was not a world that was all sweetness and light. Alice meets some quite disagreeable characters along the way. But I think the fact that Lewis Carroll never writes down to his readers was appealing to me even at a young age. I was forced by a sadistic first grade teacher to read Dick and Jane books at school while the fantastic world beyond the mirror or down the rabbit hole were my nightly companions. Who wouldn't love that by contrast?! And as I became older I fell in love with the way Carroll made language such FUN! Just think about Humpty Dumpty explaining how he can make words mean whatever he likes. He explains, "They've a temper, some of them -- particularly verbs: they're the proudest -- adjectives you can do anything with, but not verbs -- however, I can manage the whole lot of them! Impenetrability! That's what I say!" And then there's all the wonderful absurd poetry that gets recited throughout both books. I personally adored "The Jabberwocky" so much that I was able to recite the entire thing from a ridiculously early age...thus adding to my weird kid status, I'm sure. ( The fact that I also knew most of the witches' chant from Macbeth didn't help much either!) And of course the books are sprinkled with so many great lines like the Red Queen saying, " it takes all the running you can do, to keep in the same place!" ( a feeling I have often!) Or the White Queen on using your imagination,"I daresay you haven't had much practice,' said the Queen. `When I was your age, I always did it for half-an-hour a day. Why, sometimes I've believed as many as six impossible things before breakfast," excellent advice for today's plugged in generation. And, of course, many more! And let's not forget the wonderful illustrations by Tenniel, although I have to admit loving the ones done by Milo Winter as well. So if you haven't read those two wonderful books lately, give yourself a treat and pull them out to reread as an adult or to share with your kids. Some books never grow old.
Posted by FairiesNest at Sunday, March 02, 2008
Email ThisBlogThis!Share to TwitterShare to FacebookShare to Pinterest