A Storytelling of Crows

It snowed yesterday (minor miracle here) and this morning I was watching the neighborhood crows flashing black against the white backdrop and looking so stark and beautiful. I'm not sure what it is about crows that fascinates me so much... a number of things I guess. Contrary to the opinion of most, I really do think they're beautiful. That lovely sheen of iridescent blue that shimmers across their feathers in sunlight and their deep soft blackness like a piece of living night. The place of Corvidae in mythology is fascinating too. Trickster, harbinger of death, creator of life, protector of a realm, so many things for so many people and still loved and hated today. They are devoted parents, loyal spouses, and amazingly, toolmakers. And what other animal has so many collective nouns that are so interesting? A cauldron, caucus, congress, cowardice, hover, murder, muster, parcel, or storytelling of crows.

A storytelling of crows, that's my favorite. I have two favorite storytellings of crows. One is the exquisite picture book by Heidi Holder that is simply titled Crows . It is a gorgeously illustrated take on the old crow counting nursery rhyme and is a constant source of inspiration for me. 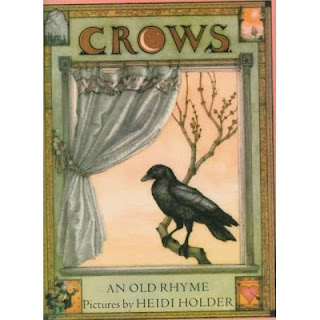 The second would be Charles DeLint's Crow Girls, two wonderful characters that appear in several of his books, perhaps most notably in Someplace To Be Flying which also has a wonderful Raven character, another Corvidae family member. This is a fabulous fantasy book and, if you haven't read any of DeLint's urban fantasies, it's a great place to start.

So after all that I'll leave you with a picture of my Crow Ladies. They are some of my favorite dolls and one of them even made an appearance in the winter 2006 Art Doll Quarterly magazine. I usually make them in pairs because of the previously mentioned nursery rhyme which starts ...One is for Sorrow, Two are for Mirth...as you can see, these two are VERY mirthful! 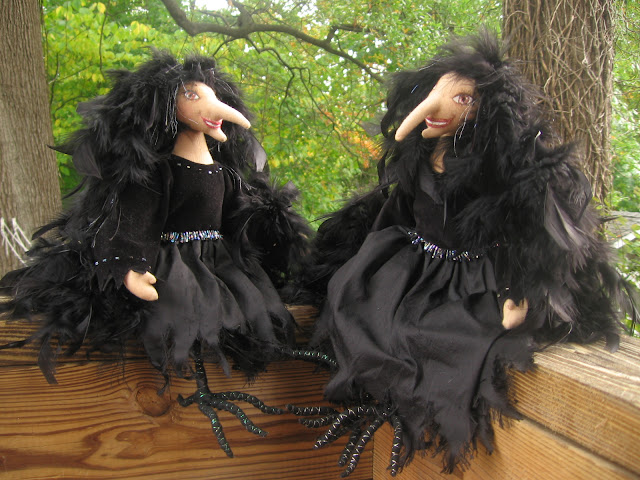 Posted by FairiesNest at Sunday, January 20, 2008
Email ThisBlogThis!Share to TwitterShare to FacebookShare to Pinterest